Cycling for softies and toughies

Cyclists will find a huge selection of tours between Darmstadt and Heidelberg that cater to riders of all abilities. There are a lot of leisurely tours along the Rhine, Neckar and in the Rhine Plain that can be combined with sightseeing and nature-watching. The hills and valleys of the neighbouring Odenwald are ideal for cyclists who like a challenge. The e-bikes that have recently become available now open up fantastic viewpoints to people who like to take it easy. The Bergstrasse-Odenwald UNESCO Global Geopark has an application that combines a large number of round-trip routes for mountain bikers, starting and ending on the Bergstrasse. In the 19 municipalities along the Bergstrasse, the offers for guests include guided bike tours as well as the opportunity to rent or loan different types of bikes, including e-bikes.

The Cyclists´guide to the Bergstrasse

The cyclists’ guide to the Bergstraße describes the well-signposted main routes of Tourismus Service Bergstrasse (TSB). The two cycle trails “Bergstrasse klassisch” (traditional sights between Darmstadt and Heidelberg ) and “naturnah” (for nature-lovers) are both located in the plains and intersect at several points. The guide also describes selected mountain bike tours that lead from the Bergstrasse into the Odenwald.

The traditional cycle trail connects places worth seeing in the towns and villages between Darmstadt and Heidelberg on paved paths and roads. The trail is 84.5 km in length and is marked with the TSB logo “die bergstrasse”.

The “nature lovers” route also runs from north to south and is marked “naturnah” on a pale blue background under the TSB symbol. The 83.2km trail takes cyclists along tracks between the fields and through the woods, past lakes and streams to pretty picknick areas with a panoramic view of the Bergstraße. The brochure is only available in German. It is free of charge at the tourist information offices, can be downloaded or ordered from Tourismus Service Bergstraße.

Cyclists’ maps of the Bergstrasse

Meki has published a map for hikers and cyclits of the entire Bergstrasse region. It is printed in four colours on a scale of 1:30,000 and can be downloaded to a tablet computer or smartphone via QR code. The weatherproof and tear-resistant map contains the two main signposted TSB cycle trails and many other cycle and hiking trails between Darmstadt and Heidelberg. UTM coordinates are available for use in GPS systems.
The Publicpress Verlag has issued two maps of the Bergstrasse on a scale of 1:50,000 that divide the region up into the northern and southern parts of the Bergstraße.
The Bergstrasse-Odenwald UNESCO Global Geopark has separately published more information and maps on a scale of 1:30,000. The maps are divided into the northern and southern parts of the Bergstraße. The tourist information offices between Darmstadt and Heidelberg offer these and other maps for sale.

The Bergstrasse-Odenwald UNESCO Global Geopark offers a modular system of signposted circular mountain bike tours with a network of interlinked routes. The more than 30 routes can be combined in many different ways, and all the relevant data can also be called up online. 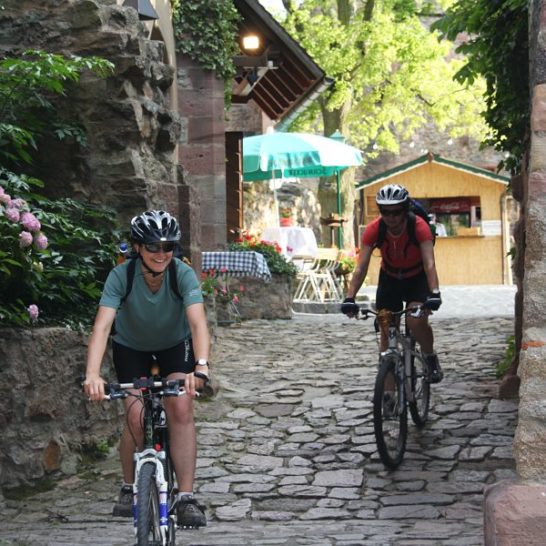